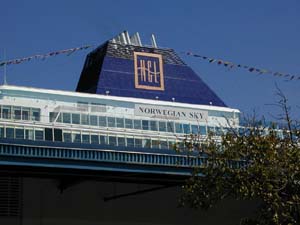 Our cruise was very relaxing. Although much too short. Here's a synopsis of the trip. As with anything, we can't help but compare it to our many HAL trips so you'll see that noted here. Some good, some bad. Our drive down was nice. Found the port easily and was able to park about 50 yards from the entrance to the check-in building. We got there about 12:00 and there were no lines for check-in. It was handled very efficiently by NCL. Much more so than with previous HAL checkin's. We were able to do everything there, including setting up our shipboard account. We had to wait a bit until boarding at 12:30 but that went swiftly.

Onboard we were told how to reach our stateroom. When we reached the approriate deck, there was a person waiting there, handing out keys. Our big surprise was when we entered the stateroom. This was classified by NCL as a "Superior Deluxe Oceanview Stateroom with Balcony." Which is supposed to be the equavalent of a mini-suite on Princess or HAL. But this was a "miniture" version. There was barely enough room for one person to walk around the foot of the bed (which had the corners cut off to gain a couple of inches). The "sitting" area consisted of a small loveseat, a 24" round coffee table, a built-in desk with a couple of corner shelves over it. The TV was a small one, probably about 15".

The outside verandah was wider than the sitting area. On the HAL & Princess ships, their cabin was the size of this one if you added the verandah to the sitting area, and then tacked on the verandah. The bathroom was compact, shower only, no tub. But it did have shelves on either side of the mirror for toiletries. However, the shower stall had only a curtain that didn't keep the water in very well and you wound up flooding the bathroom floor, which is probably why they have a drain there as well. Poor design if you ask me. Another big surprise came when we started to unpack. There are no drawers in the cabin section, only three small drawers in the closet. So we wound up keeping some stuff in our bags that fortunately fit under the bed. There was one nightstand with 2 shelves. There was the usual safe and refrigerator. But nothing in the refrigerator. I would have thought they would at least put in some soft drinks even if they had a charge. They did provide a bascket of fruit and Evian bottled water in the room at no charge along with the usual ice bucket. But the ice bucket was clear plastic and the ice always melted too fast.

I'm not going to go into a day by day, hour by hour diary here. Let me just summarize some topics:

Dining facilities -- There are three main dining rooms and you are assigned to one. There are also two alternative restaurants and the Buffet. All of them are very attractively designed.

Dining Room - food and service were very good. We had no complaints here and ate most of our meals there, breakfast, lunch and dinner.

Le Bistro (Alternative restaurant - Meditteranean) - This was spectacular. I can't rave enough about the food here as did everyone we talked to. Al & I both had a filet mignon that melted in your mouth. I had a mushroom soup served in a bread bowl that was to die for. Service was also excellent with a different staff than in the dining rooms.

Ciao Chow - (Alternative restaurant - Italian/Chineese) - Couldn't get in for dinner but had pizza here for lunch one day which was good for mass produced pizza. Better than on our Princess cruise.

Buffet - Here's where they are really lacking. Small selection, not well prepared. Half the seating area as on HAL ships. We ate here once for breakfast and never again. Had lunch there only the day we were at the private island because the dining rooms were closed.

Midnight Buffet - These are rotated around the dining rooms. We attended two, a chocolate extravaganza which Al loved and another which was a sampling of appetizers and desserts. Both were good.

Public Areas - The ship is beautiful but most of the public areas are not adequate for the number of people they carry. Some things could have been laid out better. The photo gallery was in a hallway and when a show let out it got very congested here. There was one big galleria shop and two small jewelry stores. The "internet" area was in a hallway outside the shops with about 8 workstations for people to use to send e-mail. Naturally, Al got to know the network manager and they spent time chatting. There are several bars and as usual we gravitated to the top one at the front of the ship which on HAL is the Crows Nest and here is the Observation Lounge. They had a good trio playing music. The Checkers Cabaret was crowded with tables (but not with people) and too dark. The music wasn't as good. Never did try the Wine Bar or the Sports Bar. The pool areas were as on other ships although this one did not have a sliding glass top. It was crowded with people in search of a tan. A few days later we saw a lot of "lobsters" walking around. The top level of the show lounge was not laid out well for a good site line and they were always overcrowded. The casino was always crowded when it was open and didn't have enough tables.

People - They had a big special offered in Great Britain and for a while there all we were meeting were British couples. We began to wonder if there were many Americans on board! Not that I'm complaining. It was wonderful talking to all of them. Another big surprise was meeting about four couples who had obtained their cruises through the OnSale.com auction also. We met so many fun and interesting people. Two of our dinner companions were from England and we spent most of the meals talking to them. It was a table for 12 and 3 of the people sat and one end and we chatted occasionally with them. Another group of 4 were together and didn't even introduce themselves to us. They were in their own little world. Don't know why they didn't get their own table. Fortunately, they didn't show up several of the nights. The age range on this ship covered all spectrums. There were some children on board but none that were obnoxious or particularly noticeable.

Staff - We had no problems or complaints with any of the services on board. The crew is a mixture of nationalities but there weren't any language problems.

Overall - There were little things that differed from HAL and you could definitely tell that NCL is a "standard" cruise line as opposed to the "premium" classification for HAL. We enjoyed the cruise knowing there would be these differences and not having raised expectations. We were very pleased by the high quality of food and good service. But because of the small cabins and ship layout we will not sail again on the SKY, although we might try another NCL ship.